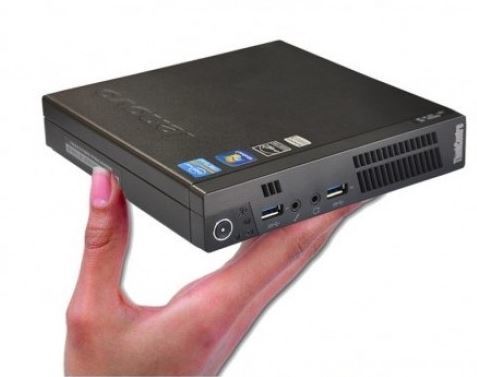 We see so many people purchasing laptops to put up with a tiny screen simply because a traditional desktop takes up so much room, weighs so much and has so many cords! Laptop are so much easier to take in for a service and they are so neat. This has all changed! A micro-desktop from us will be less than half the size and weight of a laptop, it will be way more powerful, have more capacity and can connect to a ‘proper’ good sized computer screen. It will also have just 2 cables!

So just how small are they? 170mm x 170mm x 38mm high and weighing just 1kg! Technology never stands still, so with people dumping CD’s and HDD’s as old technology and switching to SSD’s, thumb drives and downloads, desktop PC’s can now be a fraction of the size that they were just a few years ago. What has also changed is the plethora of Internet capable portable devices such as smart phones and tablets. These devices are reducing the need for a laptop for many that don’t need an entire portable office when on the road.

A more standard setup is now a smart phone and a desktop PC at home – with some also opting to throw a tablet into the mix to take on holidays. If the desktop is a micro-tower you no longer have to compromise on screen size and power, plus you can keep cord clutter to a minimum. They will need a power cord and a HDMI cord which carries both video and sound to a large screen with built in speakers and that’s it. Micro-towers can have built-in Wi-Fi to receive your Internet and to talk to printers. They can also connect wirelessly to a keyboard & mouse and are smaller and lighter that a laptop to carry to a PC service centre when needed.

At Kerr Solutions we have changed our entire shop over to micro-desktops and now reap the rewards of more desktop space and lower power bills! That is another advantage that I had left out – micro-desktops use around a quarter of the power of the traditional desktop PC! In an office situation, micro-desktops have the capacity to connect to a second or even a third computer screen without any changes or special adaptors! Talking of screens – laptop screens are rarely larger than 15.6” measured across the diagonal whereas the smallest desktop screen we sell is 22” with built-in speakers, the latest vibrant and crisp screen technologies and costs just $169.